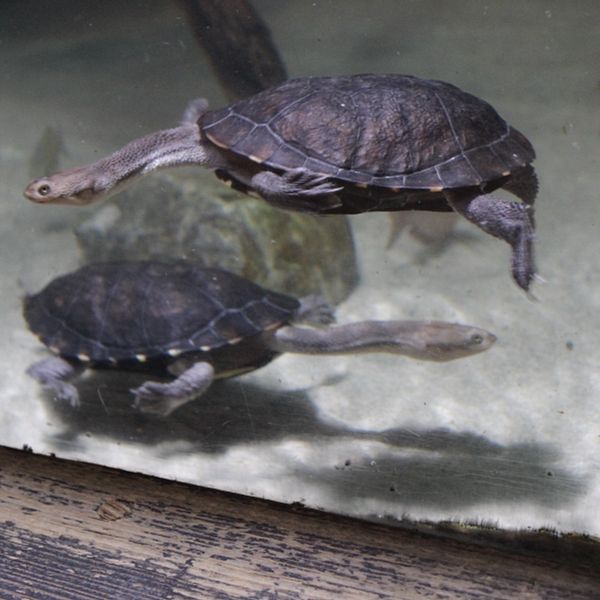 Rivers of the World
Back To All Animals

They are a semi-aquatic species, spending time both in the water and on land. They sometimes inhabit streams and rivers but tend to be found in slow moving water, such as swamps or wetlands.

The snake-necked turtle can grow up to 11 inches (28 centimeters), and its neck can be more than half the length of its shell. Males are typically smaller than females and have longer, thinner tails.

Meet the common snake-necked turtle, also known as the Australian snake-necked turtle. As the name implies, its most distinctive feature is its extremely long neck. In some cases, this turtle's neck can be as long as its shell! It’s also a type of side-necked turtle, meaning that it bends its head sideways into its shell rather than pulling it directly back.The snake-necked also has powerful webbed feet for swimming, digging, and tearing apart prey. Its shell is flattened, broad, and brown with black-edged scutes. They are typically found inland in slow-moving freshwater habitats such as swamps, dams and lakes of Australia, preferring a soft, sandy bottom. It’s considered carnivorous, eating a variety of animals, including insects, worms, frogs, small fish, crustaceans and mollusks.